Theme Lab: Behind the Scenes of Bitcoin Mining

As powerful long-term trends continue to evolve and disrupt vast segments of the global economy, we believe it is increasingly valuable to see and evaluate these themes in action. In this Theme Lab, we visited Riot Blockchain’s Whinstone facility in Rockdale, Texas. Whinstone is the largest bitcoin mining and hosting facility in North America as measured by developed power capacity, and it is rumored that it could be the largest in the world upon the completion of their expansion plans.

Riot Blockchain is one of the largest publicly traded U.S. bitcoin miners and hosting service providers. Bitcoin mining is the process of utilizing electricity and advanced hardware to secure the Bitcoin network by process of brute-force computation. Bitcoin miners are compensated in bitcoin rewards for deploying their mining rigs – commonly referred to as miners, or application-specific integrated circuits (ASICs) – and expending high amounts of energy in competition to process transactions on the network (For more details on bitcoin mining, see Bitcoin: The Basics and/or Four Companies Leading the Rise of Blockchain Technology).

In recent periods, about 80% of Riot’s revenue has come from bitcoin mining, while the remaining 20% has come from the sale of data center hosting services.1 Data center hosting services are sold to large institutional clients that want to mine bitcoin but are lacking the data center infrastructure or the technical expertise to manage a mining operation, so Riot will provide the facility space and electricity, machine installations, and on-going maintenance and management services.

Riot purchased the Whinstone facility in April 2021 with a developed power capacity of 300 megawatts (MW) spread across three buildings. Capacity in this industry refers to electricity consumption as opposed to square footage, as the machines in these data centers will meet constraints on power capacity before running out of physical rack space. Hence, it’s a facility’s power supply that defines the size of an operation and indicates how many machines can be supported. In June 2021, Riot embarked on a four-building expansion plan, which will add an incremental 400 MW of power to the facility. 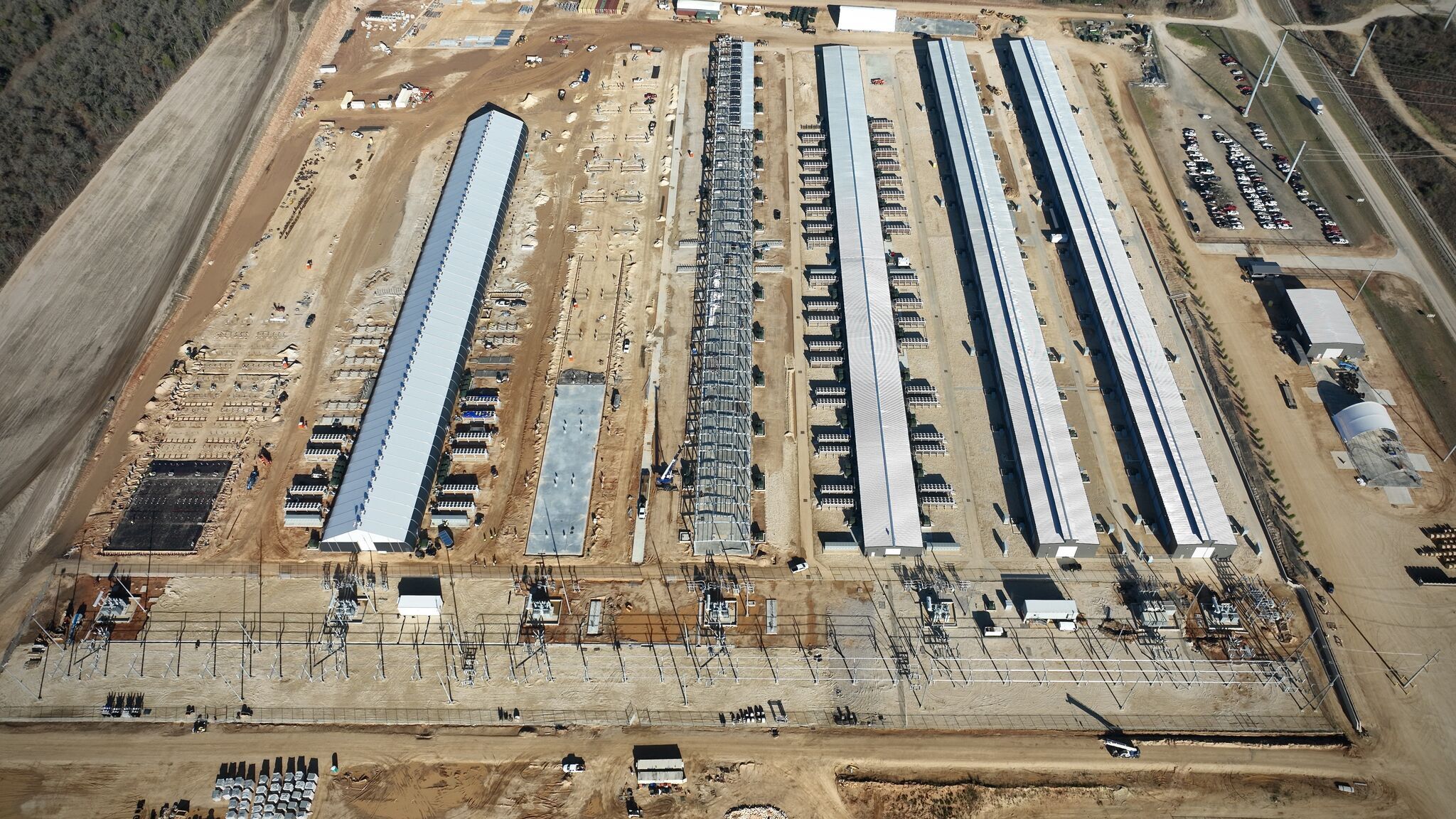 Data as of Jan 21, 2021. ‘Hosting client’ indicates that Riot Blockchain is selling their infrastructure services to a 3rd party client instead of mining with their own ASIC rigs.

The completed facility will have 700 MW of power spread amongst seven buildings that are expected to host about 200,000 Bitmain Antminers in aggregate. To better understand the scale of this facility, it’s estimated that 700 MW of power could support the annual energy consumption of about 570,000 homes in the U.S on average.2,3 Operating these machines at this scale produces a lot of heat and noise as a byproduct. For context, every S19 Pro Antminer is slightly larger than your average men’s shoebox, they produce 75 decibels of noise which is roughly equivalent to a full-sized vacuum cleaner, and they produce about 11,000 BTU/hour of heat which is more than many portable space heaters.

Bitcoin mining is a very capital-intensive business with high fixed costs. Miners typically place large orders for ASICs months ahead of their scheduled delivery with a down payment being required in advance. As an example, Riot recently made a purchase order for 18,000 Antminer S19 XPs, and this purchase required a 35% down payment ($71 million in this case) to be made 6-12 months before the machines arrive.4 Riot estimates that the cost of acquiring the ASICs makes up about 75% of the total cost of bringing a new mining facility online, but this split can vary slightly depending on the type of infrastructure being utilized.

Electricity costs are the predominant recurring expense, while other recurring costs such as maintenance and labor are relatively modest in comparison. Some miners may have additional recurring costs to pay for hosting and/or mining pool operator fees, but this varies by each mining company. Riot receives income from hosting, but they indirectly pay mining pool operator fees that equate to about 2% of revenue.5

Currently, miners receive 6.25 new bitcoin and the corresponding transaction fees for the production of a valid block, so miner revenues are directly tied to the price of bitcoin. A miner’s primary recurring expense is the electricity required to power their ASIC miners. And lastly, the Bitcoin network hash rate is a measure of the total computational power behind all miners in aggregate, and it’s a proxy-measure for the difficulty of mining a bitcoin block. Given the bitcoin inflation schedule is predetermined, a higher network hash rate means more computational power is competing for the same fixed share of new bitcoin. Hence, if a miner keeps their hash rate constant while the network’s hash rate is rising, that miner’s expected future bitcoin rewards will decrease.

In today’s market environment, institutional bitcoin miners generate marginal revenue far greater than their marginal cost. At the time of the tour in late October 2021, bitcoin prices breached $66,000 and Riot was mining in their Whinstone facility with a marginal cost of approximately $5,000 per bitcoin (It’s important to note that bitcoin is volatile, and the price has fallen to $37,500 as Feb 2, 2022). Whinstone is able to achieve this cost level as they own their hosting infrastructure and maintain a long-term power supply agreement with an average cost of 2.4c per kilowatt hour.6

The large profitability margin at this point in time will not persist forever, as other miners will be incentivized to add ASICs to their fleet, increasing the network hash rate and the cost to mine bitcoin. However, key variables such as the ban on mining in China, supply chain challenges and the global shortage of chips and other electrical components, as well as insufficient hosting infrastructure has helped catalyze the material divergence seen today.

Electrical infrastructure is the backbone of the bitcoin network, and establishing the critical components required to operate a facility at Whinstone’s scale is a big up-lift. Whinstone is tapping a 5,000 MW switchyard of electricity, and they need high voltage transformers to siphon off 100 MW increments for each building. Each building then has forty 2.5 MW transformers and additional lower voltage transformers siphoning this down further to a 12-volt machine plug. All of this is to say that there is a lot of electrical equipment necessary to bring a facility of this scale online, and in today’s supply-chain disrupted world, it would not be easy to replicate Whinstone’s infrastructure in short order. Riot estimates the delivery time to receive new high voltage transformers is nearly a year long today.

Additionally, in December 2021, Riot acquired ESS Metron, a provider of electrical equipment solutions, to improve their ability to procure infrastructure and to enhance their competitive position across the electrical supply chain.7

Managing the temperature of the facility and keeping the ASICs cool is one of the key components of bitcoin mining. The fan-cooled buildings utilize a multi-step approach to achieving this goal. First, the buildings are equipped with an evaporative cooling wall. Whinstone has a mile long pipe underground connecting to Alcoa Lake that allows them to pump water directly into their facilities. Water is pumped into their evaporative cooling walls, and as air flows through the wall, the water absorbs heat from the air resulting in a 16 to 20 degree decrease in temperature on the inside of the wall.

Inside of the facility, thousands of ASIC miners are spaced on modular racks. Each miner has intake fans which pull ambient air into the miner, this air cools down the chip that is warmed from the computation, and exhaust fans on the back of the miner recycle the hot air into an insulated heat aisle on the backside of the wall. Temperatures in the heat aisle can reach up to 140°F, and this heat is recycled through a chimney-like system built into the ceiling. 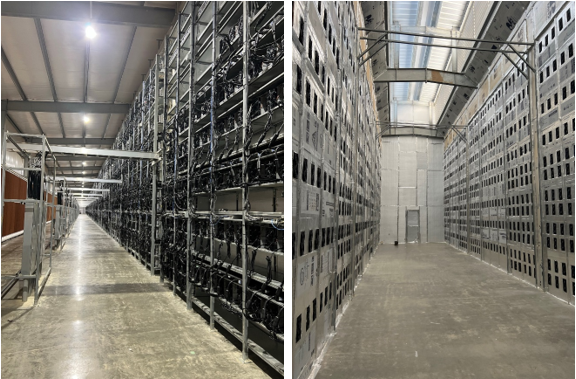 Source: Global X Research – The left graphic shows a single row of ASICs in a fan-cooled facility; this alley acts as a wind tunnel as each ASIC pulls air through it. The right graphic shows what’s behind the wall in the left graphic. Hot air is exhausted into an insulated heat aisle before exiting the building.

In October 2021, Riot announced they would launch the first industrial-scale liquid immersion mining facility, committing 200 MW of their expansion to immersion cooling technology in buildings F & G. Immersion technology submerges the ASIC miner inside a pool of dielectric fluid that is very similar to mineral oil. This fluid is an electrically non-conductive liquid with a higher capacity to transfer heat than that of air, making it a more efficient cooling approach. These facilities have a higher fixed cost to establish, but they have the ability to prolong equipment life and expand the hash rate per machine by allowing the chips to operate at lower internal temperatures.

Visiting the Whinstone facility highlighted the scale and capital intensity of an institutional bitcoin mining operation. Gaining perspective on the amount of labor and capital that went into constructing this state-of-the-art facility, while recognizing that this behemoth operation still only makes up a small single digit percentage of the Bitcoin network’s hash rate in aggregate, provides insights into the immutability and security properties embedded in the Bitcoin network.