User growth for many established social media platforms has been slowing for years as these internet giants are simply running out of non-users in their addressable markets. In order to fulfill high growth expectations, these networks pivoted their business strategies away from acquiring new users and instead towards maximizing the monetization of existing ones. While the first stage of ARPU (average revenue per user) maximization centered around hyper-targeted advertising, more recent efforts center around social commerce: where social media and ecommerce intersect to offer shopping experiences that live directly within social media platforms. This rapidly emerging trend is causing retailers to redouble their social media strategies and social media platforms to retool their apps around shopping features.

Social commerce differs from traditional e-commerce because rather than shopping on dedicated e-commerce websites, it allows users to shop within the social media platforms that they use regularly. Such an approach reduces frictions, allows users to digitally comment or consult with friends, and enables hyper-targeted advertising and custom shopping experiences. Conversely, traditional e-commerce methods, like online stores, tend to be more brand or product-centric, with shoppers often navigating pages of dozens of products to find the goods they want.

Traditional social media platforms are in the late majority phase of adoption as a very high percentage of internet users are already active on social platforms. While the maturity of this theme implies future growth may slow, social media companies are actively leveraging their vast user bases and know-how in technology to enter emerging segments with earlier adoption and vast opportunity. Social commerce is one such growth opportunity for social media companies – and perhaps one of the largest. In the U.S., social commerce is projected to reach $80 billion by 2025, accounting for 5.9% of retail e-commerce sales, up from $36 billion and 4.4% in 2021.1,2 China, the world’s most advanced social commerce market, has a head start; sales are nearly 10 times the size of the projected U.S. market at $351.65 billion as of 2021, and growing ~31% in the last year alone.3

Social commerce is still in its early days, but it is expected to continue to grow faster than broader e-commerce sales, reaching a global penetration rate of ~6% by 2025. 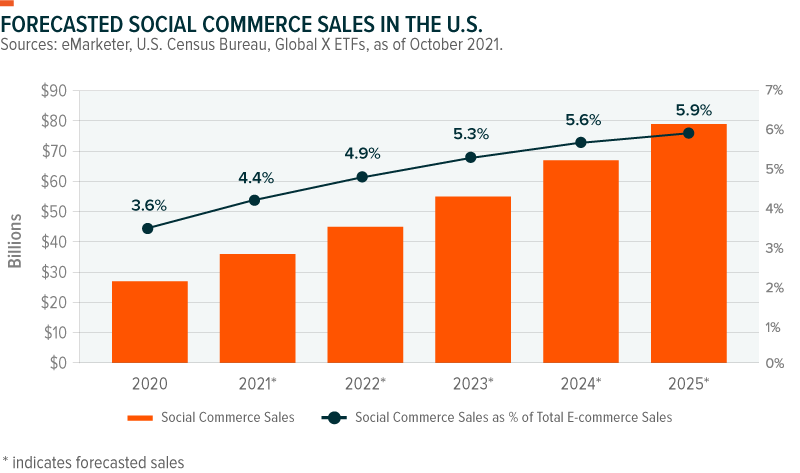 Initially, the pandemic tightened marketing budgets, causing ad spending to decline. But by the end of 2020, spending on digital ads increased 12.2% year-over-year with companies recognizing consumer preferences shifting towards e-commerce.4 And much of that spending went to their social media efforts.

In August 2021, The CMO Survey found that social media ad spending increased from 13.3% of marketing budgets in February 2020 to 23.2% in June 2020.5 Results are promising, particularly for small and midsize businesses (SMBs). For example, SMB advertisers using Twitter’s Quick Promote, which allows advertisers to target customers by location, age, and gender, reported that revenue per campaign was up 26% in Q2 2021 versus more traditional advertising strategies.6 Additionally, Meta Platforms’ Facebook is expanding Business Inbox on Messenger specifically for SMBs as we approach the holiday shopping season. They noted 72% of SMBs in the U.S. that use personalized ads say they are important to their success.7

The Facebook, Instagram, and WhatsApp services outage on October 4 showcased SMBs’ growing dependency on these online platforms. In Brazil, the six-hour outage cost SMBs an estimated 6.6 million Brazilian reals (roughly $1.2 million), which is about 2% of the average daily e-commerce revenue generated in that market.8

A meaningful shift toward greater ad spending on social media was likely inevitable, in our view. The pandemic simply accelerated the shift. The strategy makes sense: Social media is part of the daily routine for many users. Sixty-six percent of respondents to a recent Global X survey said that they interacted with at least one of their social media accounts every day.9 So, increasing ad dollars to digital channels during the height of COVID, when users were more housebound than ever, was opportunistic. Average user time spent per day on social media as of October 2021 was 2 hours 27 minutes, up +2.1% Quarter-over-Quarter (QoQ).10

With an increasing share of users’ time spent on social networks versus traditional consumer entertainment options, social networks recognize that there are opportunities to capitalize on their user visits. Since 2017, traditional streams of media such as television and radio suffered decreasing daily time spent per user, while social media progressively increased. 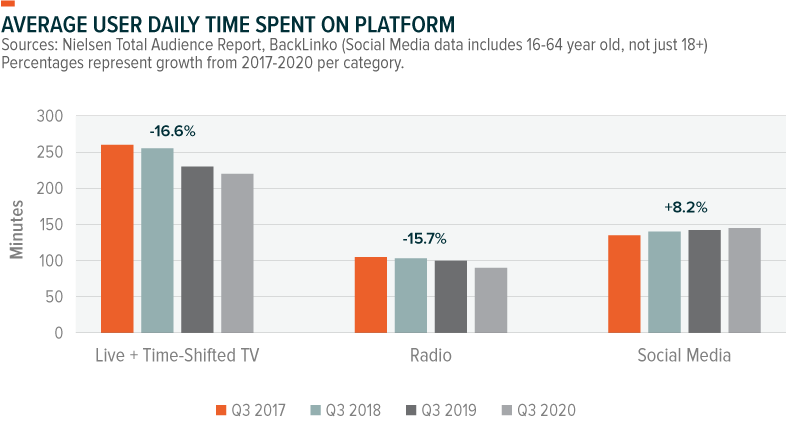 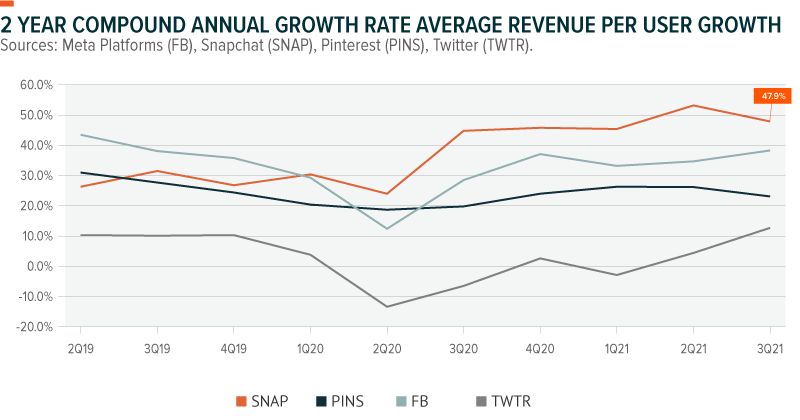 Historically, advertisements on social platforms were designed to encourage click-throughs that brought users to the advertiser’s site to ultimately make a purchase. But this process introduced unnecessary steps that ultimately dissuaded some customers from completing purchases. It is logical that social media sites, and their advertisers, recognized that eliminating this friction by allowing purchases directly within the social platforms could result in higher conversion rates. Beyond that, in-app purchasing also allows social media companies to gather more comprehensive data on the shopping habits of its users – data that can ultimately be used to create more precise product recommendations and advertisements, ultimately driving even more purchases.

Social commerce also extends to word-of-mouth level in which friends can interact on social platforms to exchange product suggestions. Vehicles that facilitate recommendations from a friend, even if the extent of that friendship comes simply by way of a follow, can wield significant influence over purchasing decisions. In the Global X survey, 48% of respondents said a recommendation from someone that they knew was the most powerful motivator for them to make a purchase. Brand trust was the second biggest factor. 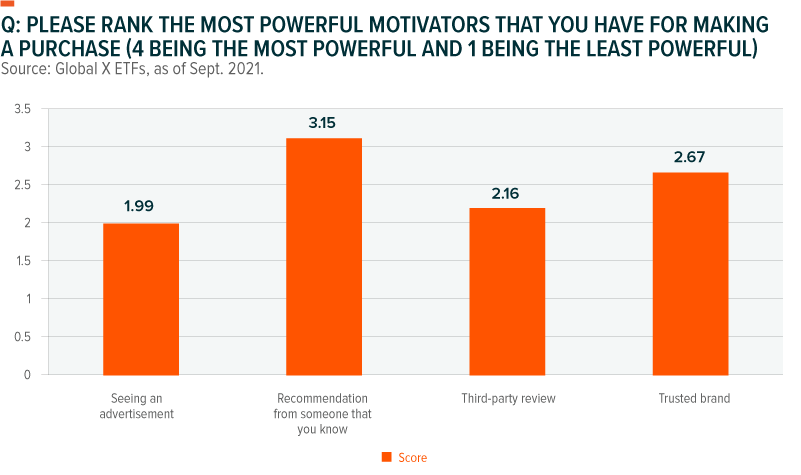 New and improved shopping capabilities increasingly pop up on social media platforms, turning these sites into dynamic shopping destinations. For example, Snapchat’s connected shopping experience not only offers consumers a “similar items” feature, but it also combines the digital experience with the perks of a physical experience through augmented and virtual reality (AR/VR) technology that imitates a fitting room experience. 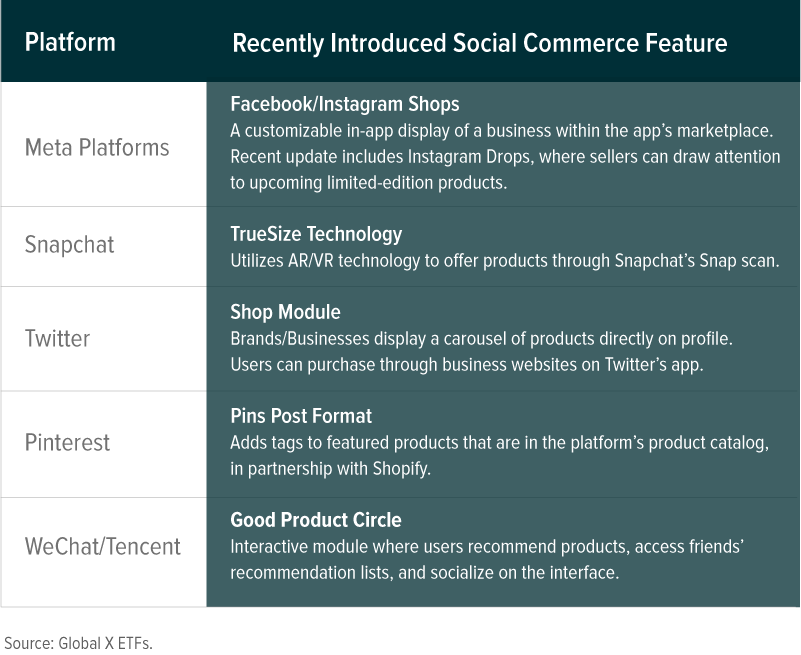 Social commerce is transitioning social media from advertising products to becoming the store itself. Blend the social aspects of shopping with easy purchasing journeys right from one’s account, spending is likely to accelerate. Many consumers are on board with the idea: 30% of online shoppers say they are open to purchasing from a social network.12 For businesses, social commerce brings the power of data and AI into play, which can improve conversion rates over traditional advertising formats and reduce frictions. It also facilitates perhaps the most influential of advertisements: the recommendations of friends. As social media companies look to maintain high growth rates, social commerce is likely to be a key piece of their strategy.